Single-family home sales on Maui rose in January, but condominium sales and overall prices began the new year on a down note.

While the “market seems to be getting its footing generally,” median prices bounced along the bottom as sales dropped and inventory increased, said Terry Tolman, chief staff executive for the Realtors Association of Maui.

“Best deals are selling, everything else is getting old,” Tolman said.

“Days on the market figures show that properties that are priced right will sell in a reasonable time frame,” Tolman said.

Short sales and bank-owned properties will have to be absorbed by buyers before Maui’s market returns to normal and prices can start to rise, he said.

But, that could take a while, said Howard Dinits, a Realtor at Waimea-based RE/MAX Resort Realty.

“I still think the worst is yet to come,” Dinits said. “We still have all those adjustable-rate mortgages that are due to increase, and when that happens, many people are not going to be able to afford their mortgages.”

Dinits said he is basing his opinion not only on the timing of the last real estate boom on Maui, but on government indicators.

“Obviously, the government doesn’t think that it’s going to improve any time soon. Their mortgage forgiveness program, which will forgive up to a $2 million loan for those that have to walk away, is good up to 2012.”

This site uses Akismet to reduce spam. Learn how your comment data is processed.

A great agent like Howard is key to a smooth and successful real estate deal.
Let my experience, education and reputation work for you.
Please Contact Howard Dinits
when you are ready to buy or sell. 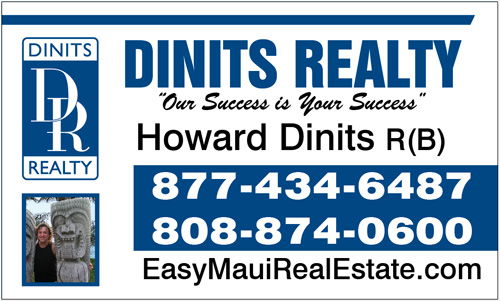